Marcia Giambrone proudly begins her 33rd season with the Buffalo Choral Arts Society grateful that this vibrant, non-profit organization continues to grow in stature and audience appeal as evidenced by its induction into the Buffalo Music Hall of Fame in 2018.

During Marcia’s tenure as director, the group has toured both nationally and  internationally performing at such prestigious venues as the Mozarteum (Salzburg), Notre Dame Cathedral (Paris), the cemetery at Normandy (France), the Kennedy Center (Washington DC), and the Statue of Liberty on the 4th of July. Distinctive composer/conductors have been in residence with BCAS including Andre Thomas, Z. Randall Stroope (who composed a commissioned work) and in April 2020, Dan Forrest.

Her community choral conducting career started with her appointment to the Orchard Park Chorale in 1981 as Conductor/Music Director. Subsequently, she was appointed to the same position with the Buffalo Choral Arts Society in 1987.

However, her experiences as a singer under the baton of Robert Shaw at both Westminster Choir College Summer Workshops and at the Carnegie Hall Choral Workshops for Singers and Conductors in NYC were truly a highlight of her teaching and conducting training. Other career honors included being named one of Western New York’s Business First 2013 WOMEN OF INFLUENCE, Teacher of the Year from NY/ACDA, ECCME/ECMEA, and the West Seneca Central Schools.

Since her retirement from public school teaching, Ms. Giambrone has taught at SUNY@Fredonia and Houghton Colleges. In addition to supervising Music Education Student Teachers during that time and leading various workshops for teachers and conductors, she has also conducted numerous festival All-County and NYSSMA Area All-State choruses.

Among many other interests, family, friends and sports are most important.  Ms. Giambrone is an avid Buffalo Sabres and Buffalo Bills fan.

Robert Hull is a life-long resident of Niagara County. He has been performing publicly since the age of 12, having three piano and organ albums published to his credit. Robert has served numerous churches in the capacity of organist and choir director since the age of 14 and is currently the organist and director of music at Saint Francis of Assisi R.C. Church in Tonawanda, NY and the First Presbyterian Church of Lewiston, NY.  He has rebuilt and installed many pipe organs, including the 44-rank Schantz organ installed at St. Francis Church.

From 2011-2015, he served as accompanist and piano instructor at the Buffalo State College of Music. He is the accompanist for Niagara Wheatfield High School, Lockport High School, North Tonawanda High School, the Red Blazer Men’s Chorus, and various theater productions in WNY.

In addition, he performs regularly in the Buffalo area as a jazz musician and volunteers his time as organist at the historic Riviera Theater in North Tonawanda NY.

Mr. Hull holds an Ed.M. in Music Education, a B.S. in Civil Engineering, and an A.A.S. in Fire Science.  He is a member of the Church Musicians Guild of Buffalo, an Active member of the Chromatic Club of Buffalo, and the American Guild of Organists. As a Senior Master Sergeant in the U.S. Air Force stationed at the Niagara Falls Air Station, his 22-year career was carried out by serving as Fire Chief for the 107th Attack Wing and as NCOIC of the 107th Base Honor Guard program. He has now embarked on a new Air Force journey, receiving a commission as 2nd Lieutenant and accepting the position as the 107th Deputy Base Civil Engineer. He lives in Niagara Falls with his wife, Sarah, and two children, Robbie and Jack. In his spare time, he enjoys working on his classic cars, motorcycles, and trucks. 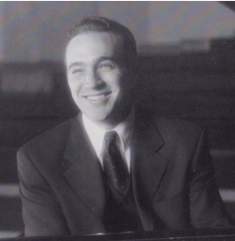